Many people are expecting that there will be an increase in the cost of equipment using engines as new engine emissions requirements are imposed to lessen pollution. For Model Year 2006, manufacturers of small off-road engines and engine powered equipment have new emissions requirements to meet, and that is just the beginning as more strict performance standards have been outlined by the California Air Resources Board (CARB) for later model years. 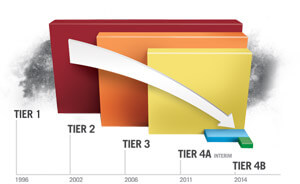 The new standards cover both evaporative and exhaust emissions, and that is what the big change is for many engine manufacturers as they usually sell most of their engines without some parts of the fuel system, particularly the fuel tank and fuel line, which are now covered under the new rulings. Since some parts of the fuel system are not being sold by many engine makers, they can no longer be liable for the whole system with regards to evaporative emissions. That made the interaction between the OEM and engine manufacturers a lot different now.

If the system that equipment manufacturers are purchasing is not complete, they are responsible for certification with regards to evaporative emissions. The changes made by the new engine emissions requirements are further explained by Kubota Engine America Corp.???s Vice President of Sales and Marketing Dennis Bourgoin, who envisaged that there will be some changes to the equipment of OEMs in the future as there will be add-ons that will make them involved in the process for the first time.

Most engine manufacturers are working with the OEMs to let them know of the changes in the engine emissions requirements. Some engine manufacturers like Kohler Co. are trying to educate the OEMs, and they are doing their best to keep their OEMs and distributors updated on what is happening with the emissions standards. Both the OEMs and engine equipment manufacturers are keeping their communication to keep each other informed of what is approved under the new regulations.

According to Brad Murphy, Subaru Robin Power Products' Vice President of Sales and Marketing, they are informing OEMs about the California engine emissions requirements even if it is not their responsibility. He added that they are their customer and they perhaps heard more about than they did. So, they let them know of what they think about what the rulings are as they understand it, then provide them the framework to work it out for themselves.

To some manufacturers, the new emission requirements created another dilemma as they have to decide if they would make two variants of the same product - one is for the state of California and the other for the rest of the country. Because of the significant changes made by the new standards, the costs of California and EPA approved products are expected to increase. All these are due to many factors including: (1) the costs linked with the interpretation of the new regulations; (2) research and development to build compliant products; (3) the equipment needed for certification and (4) the process of certifying a product itself.

Many engine manufacturers and OEMs think that the costs are big - equipment cost, cost of engineers and technicians' time, as well as the tests that will be made. What's worse is it will take them 140 days to know whether they succeed or not. The sentiment and reactions of most engine manufacturers and OEMs are almost the same as Bourgoin. The company follows the wide array of changing California standards on a day to day basis, and they have a separate facility in Japan which is devoted to meeting and surpassing the specifications. Then there is certification on the evaporative emission side, which can be carried out by component certification or by means of Sealed Housing Evaporative Determination (SHED) testing.

SHED testing enables certification of the whole unit by placing it into a SHED, which can cost up to a million dollars as it is a controlled environment that undergoes a significant temperature cycle everyday. Component certification allows vendor certified parts like fuel tanks, fuel lines or carbon canisters to be put together. Almost all manufacturers would perhaps go for component certification, but that is not without its difficulties either.

To some manufacturers that have different fuel lines, lengths and shapes, getting all the variants certified from various vendors is difficult. Apparently, there is a chance that all extra costs to meet engine emissions requirements can be shouldered by the end users. Rental companies would be affected as well. These companies will run into a similar predicament if they do repair and maintenance on equipment with evaporative-emission control systems.

The best possible solution that rental companies may take to avoid such problems associated with the new rules is to keep informed. Bear in mind that these regulations are only applicable to engines in California and there are equipment that are exempted.

The publisher of these pages is in no way responsible for any damage caused to you, your pressure washer, anyone else, your property, or anyone else's property by trying to implement or by successfully implementing the above-mentioned performance and services.